Drawing Inspiration from The Checklist Manifesto : Redivus Health Join us in combating COVID-19 and see how we can help

Drawing Inspiration from The Checklist Manifesto

Dr. Jeff Dunn worked as a hospitalist for many years before founding Redivus Health. During that time, he was involved in many resuscitation events where the patient was in cardiac arrest. He knows he is not immune to making mistakes during these events and observed others having similar problems.

“I often wondered why there wasn’t a decision aid other than the standard ACLS algorithm card. I found it difficult to follow the card during the heat of the moment. The cognitive load is tremendous, the pressure is off the charts, and it’s not uncommon to freeze from the adrenaline. Why are we relying on our memory to recall a multi-step algorithm during such a chaotic event?”

Here Dunn explains why The Checklist Manifesto made an impact on his thinking as he developed the Redivus resuscitation software: 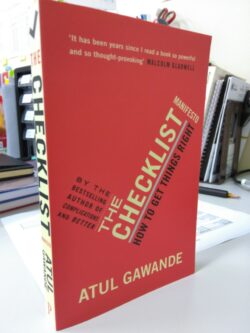 When Redivus Health founder Dr. Jeff Dunn read The Checklist Manifesto: How to Get Things Right by surgeon, author, and public health leader Atul Gawande, the idea of using a checklist clicked for him. It was one of the inspirations for Dunn developing the idea of a medical app that would operate as an advanced digital checklist for providers to use during the most time-critical and stressful medical emergencies.

“As a hospitalist on the front lines, the idea of checklists resonated,” Dunn said. “If checklists can bring high reliability to airplane emergencies and constructing buildings, why are we not implementing them in healthcare to make patient care safer? The simple checklist made sense, but I felt like providers needed a digital tool, one that provided intuitive, decision tree logic like a GPS system. That’s how Redivus came about. It’s a clinical GPS for the most time-critical event: a cardiac arrest resuscitation.”

In The Checklist Manifesto, Atul Gawande examines how different industries, such as engineering, construction, aviation, and finance, use checklists with great success. He describes the process of researching and developing a safe surgery checklist for the World Health Organization (WHO) from 2006 to 2008 to reduce avoidable deaths and harm from surgery on a global scale.

It was no small task. And he succeeded.

In the WHO surgical safety checklist pilot program with eight hospitals around the world, Gawande’s team tracked 4,000 patients who underwent surgeries over the course of several months. The results clearly showed that using the simple checklist enhanced communication for the medical team and improved the safety of patient care during surgery. The checklist reduced the rate of infections, the rate of major complications, and the number of deaths.

Perhaps most strikingly, all of the surgical staff members who had used the checklist were asked, “If you were having an operation, would you want the checklist to be used?”

Gawande also wrote a 2007 article for The New Yorker about Peter Provonost, who at the time was a critical care specialist at Johns Hopkins Hospital. In 2001, Provonost came up with a simple five-step checklist for doctors to use as they placed central lines in the ICU, with a goal of reducing infection rates. Importantly, Provonost and the hospital empowered nurses to intervene if one of the steps was missed.

Over the course of a year, the 10-day central line infection rate at John Hopkins Hospital dropped from 11% to zero.

In 2003, Provonost was asked to assist hospitals in Michigan with implementing the central line checklist across the state’s hospitals. After the first 15 months, the Michigan hospitals in total estimated they had reduced costs by $175 million and saved more than 1,500 lives.

Gawande lamented if the checklist had been a new pharmaceutical drug that was this effective at saving lives, it would be backed by a nationwide marketing campaign to urge doctors to prescribe it and patients to ask for it.

“Atul Gawande and Peter Provonost have both proven the checklist method works,” Dunn states. “Why is change so hard in healthcare, even if we know it makes care safer and more effective?”

Gawande and Provonost continue to advocate for using checklists in medicine while inherently understanding, as doctors, why it’s a challenge.

“It somehow feels beneath us to use a checklist, an embarrassment. It runs counter to deeply held beliefs about how the truly great among us – those we aspire to be – handle situations of high stakes and complexity,” Gawande explains. “The truly great are daring. They improvise. They do not have protocols and checklists. Maybe our idea of heroism needs updating.”

Looking at the results of just these two examples, it’s difficult to understand why checklists are not more widely adopted in the U.S.

“When we look closely, we recognize the same balls being dropped over and over, even by those of great ability and determination,” Gawande concludes in his book. “We know the patterns. We see the costs. It’s time to try something else. Try a checklist.”

As a hospitalist, Dunn encountered cases where a code blue was called for a patient in cardiac arrest and the resulting response from the medical team was uncoordinated and chaotic. He knew there had to be a better way.

“Healthcare providers are human, which means inevitably, they are going to make mistakes. During high-stress situations like cardiac arrest, that rush of adrenaline can cloud even the sharpest minds,” Dunn explains. “We need to learn from pilots who, when an engine stalls and lives are at stake, turn to a checklist.”

Redivus Health uses patented digital technology to take the checklist to the next level. Launching the Redivus code blue resuscitation app on a mobile device or desktop immediately provides a digital safety net for care teams to follow ACLS / PALS guidelines and focus on care for the patient, without worrying about watching the clock or missing a critical step.

“Life or death situations like cardiac arrest are unbelievably stressful,” Dunn says. “Anything that can cross-check decisions and provide a safety net is a win for providers and the patient. Redivus has been shown to decrease mistakes and errors by 66% during resuscitation events. We are just another validation point that the checklist idea works.”

Learn more about Redivus resuscitation software for cardiac arrest and respiratory arrest by scheduling a virtual demo with our team.